Vaccine antigens are the substances that could stimulate immune responses and induce specific antibodies against its target in the body. The original vaccines were made by live attenuated virus or inactivated virus, which had less technical difficulty, easier preparation but higher safety risk because of using whole pathogen as inoculum. With the advances of molecular biology and protein purification, molecules such as protein, DNA, mRNA have been applied and developed as vaccines. For example, mRNA vaccines developed by BioNTech/Pfizer and Moderna have been shown to induce specific antibody production and T cell immunity thereby substantially protect people from virus infection and severe symptoms. To develop a mRNA vaccine for defending pathogen, the first step is to select proper antigen then design its genetic template for RNA production. Taking COVID as example, viral spike glycoprotein is essential for host cell entry. When it serves as antigen, activated antibodies and T cell immunity are supposed to be able to specifically bind or neutralize spike protein, resulting in blocking virus invasion. Therefore, most of biotech companies including BioNTech/Pfizer and Moderna have considered spike as antigen for vaccine development. To utilize mRNA technology, it’s necessary to understand the biological role and structure of mRNA. Living organisms make proteins by sticking to central dogma: DNA is transcribed to mRNA, and mRNA is translated to protein. The next figure illustrates the mRNA design in DNA plasmid level. Following the order, the overall sequence encompasses 5’end of untranslated region (5’UTR), open reading frame (ORF) of target protein, 3’terminal of untranslated region (3’UTR), and poly adenylation (poly(A)) tail sequence at the end.   This expression cassette is flanked by T7 promoter (T7P) and a restriction cut site, which enable to linearize plasmid DNA. Linearized DNA could be served as template for transcribing RNA in vitro. mRNA will be obtained further by 5’cap modification. 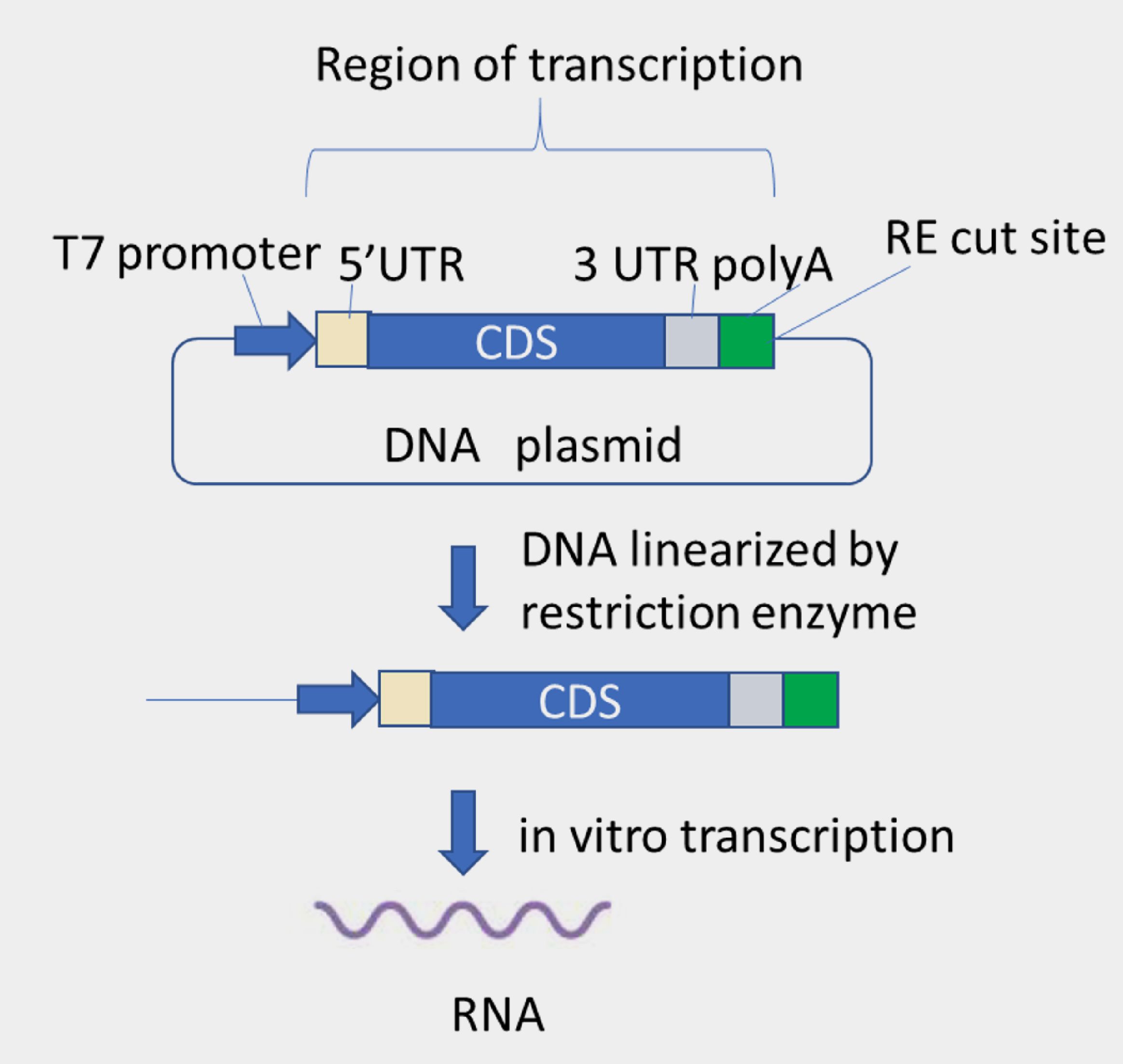 Several companies may generate poly(A) tail by enzymatic reaction, hence there is no poly(A) sequence harbored in DNA plasmid. Either way is applicable. SMOBIO has built up 3 types of DNA vector for RNA manufacturing: 1. Pfizer/BioNTech version, which contains 100 bases of adenosine at the end of expression cassette.  2. Moderna version, which has no poly(A) tail and requires appending them by post-transcriptional modification. 3. SMOBIO in-house version, which is equipped with a 200 base-length of poly(A) tail in the template.

The regular option of promoter is T7 promotor. There are several alternative promotors, like T3 and SP6 as well.  The only thing is to choose matching RNA polymerase to the same type of promotor. For instance, applying T7 RNA polymerase for in vitro transcription when utilizing T7 promotor.
In addition to promoter and target protein, the parameters of 5’UTR, 3’UTR, and length of poly(A) tail are all critical to downstream protein expression.  Therefore, it’s essential to determine proper 5’UTR, 3’UTR, and length of poly(A) based on optimization for ensuring better protein expression and leveraging mRNA vaccine efficacy.

(1) DNA template library construction After finishing plasmid construction and propagating DNA by bacterial transformation, it’s necessary to build up E. coli master cell bank for consistent quality of batch production.  To verifying this, there are plenty of assays for check including plasmid sequencing, PCR, or restriction enzyme reaction analysis.

(2) Plasmid DNA preparation To economically achieve mass plasmid DNA production, it would go through E. coli fermentation for scale-up manufacture after having the master cell bank. Plasmid sequence accuracy (by DNA sequencing), full removal of E. coli host materials (genomic DNA, RNA, and proteins), and impurity residuals are the quality checkpoint in this phase. Endotoxin removal under GMP regulation would be the further prerequisite standard for vaccine use. SMOBIO has produced and supplied DNA marker reagents worldwide since 2007.  We are fully-experienced in mass plasmid DNA production, where have accomplished annual 20 liters of DNA marker manufacturing and processing in 2021. With over 10-year experiences, we have reached 10 grams of DNA plasmid output in single batch operation, which is sufficient for synthesizing more than 30 grams of mRNA (calculation based on 57% ratio of RNA cassette content in plasmid), then being theoretically available for making 10 million doses of Pfizer/BioNTech or 3 million doses of Moderna COVID-19 vaccines. According to this, we believe it is feasible to reach the required amount of DNA for mRNA vaccine manufacturing with further scale-up process.

(3) Plasmid DNA linearization In order to synthesize RNA in following step, plasmid DNA is required to be linearized by restriction enzyme reaction. As RNA polymerase is able to identify promotor sequence, the restriction enzyme cutting site would be set right after poly(A) tail sequence to let RNA transcription finish with uniform length of RNA product and consistent quality.